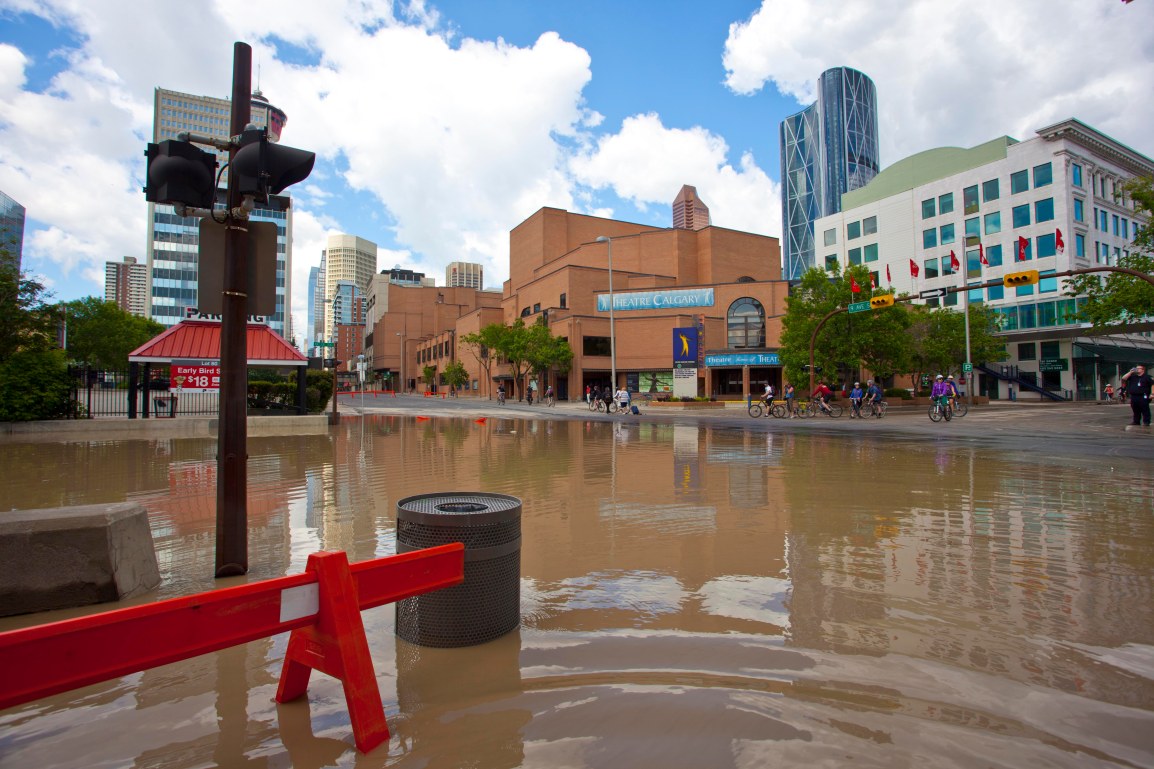 Every Canadian knows Calgary’s tropes. It’s an oil town. It’s the gateway to the Rockies. It knows how to put on a good show every year for the Calgary Stampede. But right before our eyes, Calgary is becoming known for something else: its weather is going berserk.

Part of this comes down to geography. Calgary is a convergence point for high elevation winds from the mountains, northernly cold winds, and humid air from the south. This causes the city to experience some of the most unpredictable weather in the world.

Another part comes down to climate change. Calgarians are seeing events tick up in intensity, as well as frequency, in part due to the pressures that the changing climate is exerting on the already chaotically situated region.

Toby Bellis, the leader of community and education with the Calgary Emergency Management Agency, says he’s seen it all. “We have a lot of severe weather,” he said. “I’ve responded to everything from wildfires, floods, heavy rainfall, hailstorms, winter storms, tornado warnings, high wind, summer storms, extreme temperature, poor air quality, basically everything you can name that isn’t a tsunami or an avalanche. We have it covered.”

Bellis expects the severity of these events to increase as climate change tightens its grip on the globe. “Climate change is having an influence and will continue to have an influence on these meteorological events in terms of frequency and intensity,” he said. “Some of the events we’re experiencing now have increased in intensity. We expect that will continue.”

That’s why CEMA is approaching the issue of managing severe weather events and climate change differently. They’ve introduced a revolutionary program that prioritizes educating the city about resilience before, during and after a storm strikes.

From street fairs to schools to private businesses, Bellis casts a wide net with his curriculum in hopes of educating every possible community on how to prepare themselves to cope with severe weather events and the changing climate. Beyond their interpersonal outreach, CEMA’s website is filled with content that covers off the emergencies that could possibly take place in the city, and how to prepare for them as a family, senior or person living with a disability.

Bellis says that the program is targeted towards two main groups that are disproportionately affected by climate disasters: Vulnerable populations (e.g., new Canadians, seniors, those with low income, persons with disabilities, youth) and high-risk areas such as communities situated on a floodplain).

“Disasters are really a reflection of underlying social inequities,” Bellis said. “Each climate hazard has unique dimensions that can offer disproportionate impacts on one group. A lot of our work is based on increasing capacity and bolstering that inherent resilience that already exists within communities.”

Even though he’s a veteran of dealing with climate resilience, Bellis admits that it’s still a difficult concept to wrap your head around. “It’s both very dynamic and complex,” he said, adding that everything from health to disaster mitigation to awareness to economic influences have to be taken into account.

Still, Bellis has a barometer, and it comes in the form of social capital. “Social bonds and social capital, as well as social accountability for community members is the greatest indicator of success during recovery from an event,” Bellis said. From neighbours helping other neighbours to evacuate their homes to ensuring that the senior with a disability down the street is OK, social capital can take on many forms. “It’s all about those relationships and bonds and ties that people have within their community,” Bellis said.

Bellis adds that resilience also means empowerment, in that people are emboldened to take action themselves in the face of an event, instead of relying on a city’s overtaxed emergency response crews. “It’s so they understand how they can collectively respond and recover from events and organize themselves to be prepared as individuals and communities,” Bellis said. He believes that if his organization can increase people’s capacity to handle events, then they’ll tap into the wealth of self-protective behaviours now equipped to their toolbelts.

CEMA has also developed an online course that Calgarians can take to better prepare themselves for emergencies. As of May 2021, it has been accessed over 11,000 times. “We have a survey built into the course, and usually over 90 per cent of respondents say they feel more prepared for emergencies after taking the course,” Bellis said. “We’ve had some really good uptake with that.”

While Calgarians clearly feel the need to get up to speed on natural emergencies, the statistics from other jurisdictions across Canada paint a different picture of how ready the nation is for environmental disasters. When it comes to amalgamating an emergency kit to deal with an event, 85 per cent of Canadians agree that having one is important, but only 40 per cent have actually prepared or purchased the necessary items.

Bellis feels that Calgary’s unique positioning as one of the hotbeds for extreme weather events has made his city the example for other municipalities who too might soon be faced with similar issues. “We’re kind of like the canary in the coal mine for other jurisdictions that don’t experience the number and variety of natural hazards that we do,” Bellis said. “They can see what our experience has been here and understand what it might look like for them in the future. In a lot of ways, we’re probably ahead of other jurisdictions in terms of our disaster risk reduction work simply out of necessity.”